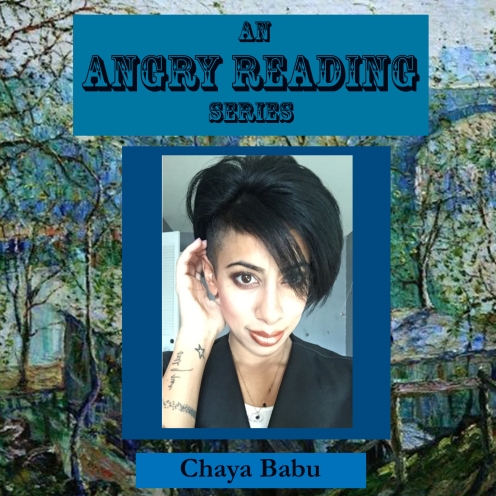 Chaya Babu is a Brooklyn-based writer, journalist, artist, and educator. Her work focuses on desire, power and oppression, cities, exile, systemic and intergenerational trauma, and more. She completed her MFA in Writing & Activism at Pratt last May, and her essays, commentary, and reporting have appeared in The Margins, The Porter Gulch Review, BuzzFeed, VICE, Open City, CNN.com, The Felt, and others. She is currently working on her first book manuscript, about the impossibility of return after diaspora and the epistemic violence of colonialism.

Why do you write?

I write because I don’t know how to do anything else. By that I don’t mean I sincerely believe I have no other abilities or nothing else to offer, but just that I don’t know how to not write. I write on the train in my iPhone notes, I write in a handful of notebooks that bear no discernible distinction in their purposes, I write in a document on my computer that serves as my “real” journal. I don’t return to any of these spaces to review what’s been written there unless I stumble upon some earlier thought that seems worth pulling out while searching for something else like the address for an appointment; I just write because I have to. Writing is how I make sense of the world. I’m realizing this increasingly as I pay more attention to the worldviews and life philosophies of the people around me, noting that not everyone needs a story for what happened to them or why, or feels the urgent to need to conceive of the world in stories and myths, symbols and metaphors. And yet still I think all of those people find a sense of resonance or truth in the stories of others. Which is also why I write — for human connection and a place in the collective I suppose. A collective of truth tellers. I hope I can count myself here. Writing for me is a way of seeing into a kind of beyond-place. A place beyond what I think of as the facile deceptions of the world.

Who do you hope reads your work?

Anyone really. Anyone who finds something in my words that they find meaningful, or even just something that ignites a small feeling for them, and that can be any feeling at all.

Where does the anger in your work come from? How does it manifest?

The anger in my work comes from a sense of injustice that needs to be confronted. As it’s showing up currently in something I’m working on, it takes the form of a birthing or re-birthing of wrath, which I describe as specific, a protective, nurturing, and compassionate anger that has its roots in all-encompassing love. Anger as necessary in rebalancing the forces that have been distorted in centuries of white supremacy, colonialism, patriarchy, and terror. I think the anger in my work manifests as a series of questions. It’s a way of coming face to face, and asking the reader to come face to face, slowly and methodically, with the the issues of what is “off,” and what kind of disruption and destruction and dismantling are needed in order to set things right. I don’t know if we can ask these questions without anger, fierceness, fire. And in that way, I think of the anger in my work as a feminist undertaking. As in, who gets to be angry? For whom is anger equated to ugliness and badness? Again, I can’t help but pose questions. It all circles back. All of the violences large and small which I hope to address in my work require righteous anger, even if this just shows up as a kind of sternness or no-bullshit attitude. I’m really into Tarot, so I’ve been thinking of this a lot as the embodiment of the Queen of Swords. When we reject or deny this absolutely integral energy in the work of truth or justice, I believe we are not doing the work.

Citizen, Claudia Rankine (this feels very much to me an example of what I said above; she is doing an asking in this work, pulling the reader in, asking them how they feel and quietly pointing to the possibility of anger as an appropriate response)

and I haven’t read this anthology yet but I’m about to based on the recommendation by a dear friend, Burn it Down: Women Writing About Anger, Lily Dancyger

Chaya Babu will be reading with An Angry Reading Series on April 13. Come through!