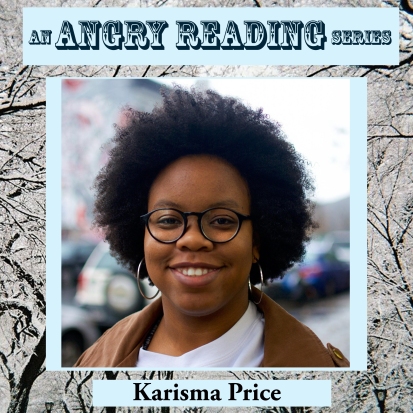 Karisma Price is a Cave Canem fellow, Pushcart Prize nominee, and 2018 Best of the Net Nominee. Born and raised in New Orleans, LA, she holds a BA in creative writing from Columbia University and is currently an MFA candidate in poetry at New York University where she is a Writers in the Public Schools Fellow. Her work has appeared in Four Way Review, Narrative Magazine, Wildness, Glass, Cotton Xenomorph, and elsewhere. In 2018, Karisma was one of the writers named on Narrative Magazine’s 30 Below 30 list of New and Emerging authors. Karisma lives in Brooklyn and is a reader for Winter Tangerine. Along with Kwame Opoku-Duku III, she is a founding member of the Unbnd Collective.

Why do you write?

I write because I want to be heard. Growing up, I was very shy and had a hard time verbally expressing how I felt–whether out of fear or never really having the words to articulate my emotions, though probably both–and I always felt comfortable writing things down. I also, like most kids,  loved to read and would get lost in stories. Writing allows me to make good use of my imagination and sort through my thoughts on the events and other circumstances going on around me.

Who do you hope reads your work?

Anyone who needs it. But, specifically, I hope other black women find it.

Where does the anger in your work come from? How does it manifest?

I’m a black woman in America and I don’t think people listen to us enough or take us as seriously as they should. I’m also a southerner (specifically a New Orleanian) and take great pride in that. What I’ve noticed since living in the north (and I know not everyone thinks this way) is that there are some people who view the south as a completely backward and oppressive place. While there are problems that exist, I find that most people think of white southerners when envisioning the people of the south and by doing so they erase the people of color who live there and contribute to its culture and history.

Refuse by Julian Randall, Heavy by Kiese Layman, Voyage of the Sable Venus by Robin Coste Lewis, Ordinary Beast by Nicole Sealey, When My Brother Was An Aztec by Natalie Diaz, The Unbnd Verses by Kwame Opoku-Duku, American Sonnets for My Past and Future Assassin by Terrance Hayes.

Karisma Price will be reading with An Angry Reading Series on December 8. Come through!